A heavy duty towing Dallas team was desperately needed to attend to a sugary spill on Interstate 35 in Dallas just before noon on November 10, 2020. The truck was carrying a full load of fructose syrup when it drove into a jersey barrier right at the I-35 split near downtown Dallas. The truck was effectively impaled and flipped over onto its side.

The truck was leaking sticky fructose syrup in both the northbound and southbound lanes of the I-35! It was imperative that the recovery of the truck was done as quickly as possible to avoid further traffic jams. Walnut Hill dispatched a power team to the accident site. A 50 ton rotator, a 50 ton wrecker, a double axle Landoll trailer, and a 35 ton wrecker were immediately on site to begin the recovery effort.

Walnut Hill also dispatched their clean up crew who arrived in a box truck fitted with power washers to take care of the sticky mess! The clean up crew jumped into action tackling the sweet sugary spill on the highway as well as offloading the remaining syrup from the trailer.

Time was of the essence. In no situation could a major interstate in a major city such as Dallas stay closed. As the clean up crew focused on offloading the syrup from the trailer, the heavy recovery crew formed a plan of action. They could have uprighted the trailed on the highway and then proceed to lift and tow it. Simple enough, right? Not really. If they had chosen to upright the trailer, it would have taken more time. Seeing as Walnut Hill came prepared with a battalion of heavy duty rotators and wreckers, they chose to take a more creative approach to the recovery.

They separated the cab and trailer and were able to tow the cab away while the trailer was still being offloaded. Once empty, they lifted the trailer as it was and placed it on their Landoll. This allowed them to get the accident site cleared much quicker than it would have been should they have chosen to upright the trailer first. Once they got the tractor and trailer cleared, the clean up team did one final sweep of the area.

Fantastic work out there team! Your innovation got the highway open before rush hour! 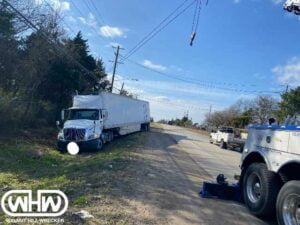 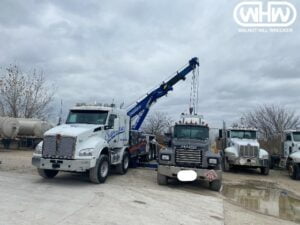 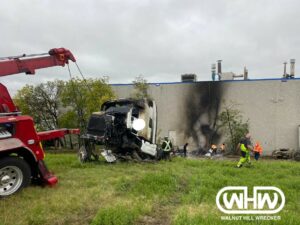